Most Kansans who work for the state are facing increases in their insurance premiums next year, especially if they have their spouse and children on the state employee health plan.

Laura Calhoun, who works in corrections, said the premium increases will be especially hard to absorb for state workers who haven’t seen many pay raises in the last decade.

Calhoun said she has cut her cable television and carpools to work to save money, but the cost of necessities like water and electricity continues to rise, along with the health care premiums.

“That’s a large increase for a lot of us,” Calhoun said. “How are we going to fit that into (personal) budgets that don’t increase? The numbers don’t lie: I’m basically taking a pay cut to stay working for the state.”

The State Employee Health Plan covers workers at public colleges and universities as well as those in state government.

Eligible employees may choose between plans from Aetna and Blue Cross and Blue Shield of Kansas.

Both companies offer a “Plan A” with a lower deductible and a “Plan C” that combines a higher deductible with a health savings account. All state employee plans are administered under the Kansas Department of Health and Environment.

According to a KDHE presentation posted online, in past years the state employee health plan had used reserve funds to reduce cost increases for members.

But the reserves are approaching their target floor of approximately $59 million, so increased expenses now must be paid through new plan revenue.

Sara Belfry, a spokesperson for KDHE, said in an email that the premium increases were the result of higher premiums to the state and projected growth rates in health care costs.

“The Health Care Commission and its actuary believe reserve funding now is at an appropriate level to maintain the financial stability of the health plan,” Belfry said. “But the excess funds that had been used to protect state employees from growing costs associated with health are no longer available, resulting in the premium rate increases in the current plan year.”

Sky-high price tags for new prescription drugs, especially those that treat hepatitis C, are contributing to premium increases across the health insurance industry.

But the largest increases will be for family plans that cover the state employee, his or her spouse and their children.

Calhoun said she understands health care costs may be rising but doesn’t think it justifies the increased burden on state workers.

She said she does her best to keep her medical costs low, but she and others who work in 24-hour residential facilities like state prisons and hospitals are exposed to a lot of germs and have shifts that sometimes mean they must seek care in emergency rooms because nothing else is open.

The nonprofit KHI News Service is an editorially independent initiative of the Kansas Health Institute and a partner in the Heartland Health Monitor reporting collaboration. All stories and photos may be republished at no cost with proper attribution and a link back to KHI.org when a story is reposted online.
– See more at http://www.khi.org/news/article/big-premium-increases-ahead-for-state-employee-health-plan#sthash.eTP6iin1.dpuf

Cool and dry conditions will continue through the week and weekend, according to the National Weather Service forecast.

Today, skies will be sunny with a high near 65. A light northeast wind will increase to 6 to 11 mph in the morning, the weather service said.

Tonight, look for mostly clear skies with a low around 43, and a northeast wind of 7 to 9 mph, according to the weather service.

Saturday, expect mostly sunny skies with a high near 63, the weather service said. A northeast wind will be 7 to 11 mph. Saturday night, it will be partly cloudy with a low of 45.

Sunday’s forecast is mostly sunny with a high of 64, the weather service said. Sunday night, there will be a low of 48.

Monday, it will start warming up a few degrees, with a high near 69, the weather service said. 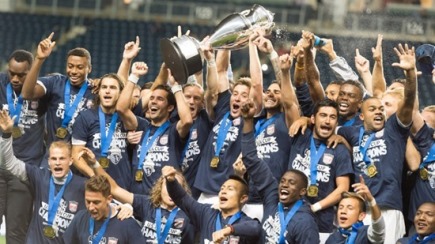 Sporting Kansas City claimed the club’s third U.S. Open Cup championship since 2004 and the team’s third major title in the past four seasons on Wednesday, prevailing 7-6 in an eight-round penalty kick shootout after a 1-1 draw with the Philadelphia Union at PPL Park in Chester, Pa.

With the triumph, Sporting Kansas City brings home the Dewar Challenge Trophy and secures a berth in the 2016/17 Scotiabank CONCACAF Champions League to compete against the best teams in North America, Central America and the Caribbean region.

Sporting Kansas City players and coaches will return to Kansas City on Thursday and will celebrate the 2015 Lamar Hunt U.S. Open Cup championship with fans during a free public event at 3:30 p.m. on the Sprint Plaza at Sporting Park prior to the 2015 CONCACAF Men’s Olympic Qualifying Championship.

Sporting Kansas City forward Krisztian Nemeth scored his fifth goal of the tournament, tying teammate Dom Dwyer for most in this year’s competition, with a 65th minute goal that leveled the match at 1-1 after Sebastien Le Toux had struck for the opening goal in the 23rd minute.

Tim Melia matched his career-high with seven saves through 90 minutes of regulation and two 15-minute extra time periods, then made two saves in the penalty kick shootout to turn away attempts from Union captain Maurice Edu and former No. 1 draft pick Andrew Wenger.

Approximately 1,000 Sporting Kansas City supporters were among the more than 14,000 fans in attendance at PPL Park as Melia’s standout performance began early, getting his hands on an effort from Edu in the third minute following a corner kick from Cristian Maidana. He would next make two saves on former Sporting KC forward C.J. Sapong, who capitalized on a pair of defensive headers to direct shots on goal in the 15th and 20th minutes.

On the opposite end, Sporting Kansas City was active in the attack as well. Nemeth got his first look at goal in the ninth minute and Paulo Nagamura twice came close to putting the visitors ahead. The Brazilian was denied by the right post in the 12th minute then sent a shot just wide six minutes later.

However it was Philadelphia, playing in the U.S. Open Cup Final at home for the second straight year, that took the 1-0 lead thanks to the tournament’s leading scorer in the modern era. Sebastian Le Toux, whose game-winning goal in the semifinal round sent the Union through to the championship, raced onto a pass from Victor Nogueira and placed a first-time finish into the back of the net for the 16th U.S. Open Cup goal in his career.

Le Toux nearly added another, in more or less identical fashion, in the 37th minute if not for Melia rushing off his line to intervene. The Sporting KC newcomer then recovered to make a diving save at full extension to push away Tranquillo Barnetta’s effort from outside the penalty area.

Nemeth, whose header carried just over the crossbar moments before halftime, found the coveted equalizer 20 minutes into the second half amid rainy conditions. With a total of three combined touches, Chance Myers played a ball into the path of Graham Zusi who flicked it further across the penalty area for Nemeth to bend a right-footed curler inside the post.

Nemeth scored in each of his four appearances in the 2015 U.S. Open Cup and his five total goals move him into a share of the club lead among all-time scorers in the tournament. Zusi’s assist was the third of his career in the U.S. Open Cup, placing him second on the club’s all-time assists chart for the competition.

The late stages produced no shortage of dramatic moments in the prelude to penalties. Melia came up big with his save on Conor Casey in the 79th minute, moments after the Union forward entered the match. Fellow second half substitute Saad Abdul-Salaam also made an impact for Sporting Kansas City off the bench, putting his header on target off a long throw-in from Matt Besler.

The rookie would then register the only shot of the first extra time period, once again connecting with Besler on a throw-in albeit this time with a ball into his feet. Abdul-Salaam eluded Casey in a tight space but had his shot blocked by Richie Marquez from close range.

The final 15 minutes would then see each side exchange one noteworthy scoring opportunity. Melia smothered a loose ball in the aftermath of a corner taken by Le Toux in the 110th minute.

Dwyer’s chance at a late go-ahead goal was spurned with an outstretched save from Andre Blake, who was then replaced in the game’s final minute in favor of John McCarthy. The reigning USL goalkeeper of the year had featured for Philadelphia in all four U.S. Open Cup games up until the final and twice led the Union through penalty shootouts.

Sporting KC was no stranger to the penalty shootout, claiming the 2012 U.S. Open Cup and 2013 MLS Cup with kicks from the mark, and the experience showed on Wednesday with seven of the team’s eight shooters successful. Both goalkeepers came up with back-to-back saves on their third try as Melia thwarted Edu and Blake tipped Nemeth’s attempt into the post.

The next eight players would convert one after another until the eighth round when Melia lifted his left leg to meet Wenger’s shot and set the stage for the decisive penalty.

Up stepped 21-year-old newcomer Jordi Quintilla — the youngest player to feature in the shootout — to secure the title with a left-footed shot as Blake dove the opposite direction.
– Story from Sporting KC