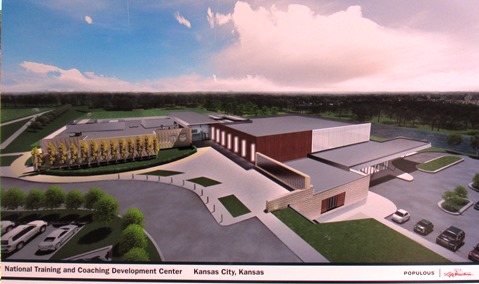 Ground was broken on Sunday afternoon for a new U.S. Soccer training center at 98th and Parallel Parkway in Kansas City, Kan.

“This area is going to keep building and building strong,” Gov. Sam Brownback said at the groundbreaking today.

According to Sporting KC officials, the development includes an 80,000-square-foot National Training and Coaching Development Center building that is scheduled to open in November 2017.

According to an April 2015 Unified Government meeting, the National Training Center is a $26 million project, with the tournament fields a $17.5 million project; land acquisition, $10 million; and parking, $1 million. The $64 million STAR (sales tax revenue) bond project development agreement was approved April 9, 2015, by the UG Commission. In July 2015, the amount of the bond issue was raised to up to $66 million, and it includes several other projects.

Seen to the south of the groundbreaking site on the south side of Parallel Parkway was the Verruckt water slide at Schlitterbahn and to the southwest was the Dairy Farmers of America building. It’s just a mile or so away from Children’s Mercy Park and Village West. Across the street, there are new car dealers.

A Sporting KC spokesman said it would be the first agreement of its kind among a pro sports team, the national sports federation and a sports medicine provider.

The center will include a National Coaching Education Center and the Children’s Mercy Sports Medicine and Rehabilitation Center. There will be sports medicine services, resources and programs for children.

Both youth sports and senior levels will be served by the center. Sporting Kansas City will use it as a training home.

Gov. Sam Brownback said the whole Village West area has been a partnership, with involvement from state, local and federal levels.

“You see these fantastic developments taking place here, and I might add, more to come, soon. More to come. This area is going to keep building and building strong,” Gov. Brownback said.

“We aspire to be the center of soccer for the United States of America,” Gov. Brownback said.

“We’re going to do the best we can to make sure Kansas City produces world-class athletes and do everything we can to be a good part of the community,” Heineman said.

Unified Government Mayor Mark Holland said economic development in western Kansas City, Kan., is the cumulative effort of partners with world-class organizations. Next year will be the 20th anniversary of the unification of Kansas City, Kan., and Wyandotte County.

Before the Village West development was here, there were just a gas station, liquor store, 150 homes and a fast-food restaurant, he said. Today, the area represents 10 percent of the valuation of the community, over $12 million annually in property taxes, has over 9,000 jobs and generates about $650 million in annual sales, he said. Other communities are trying to find out how they can do this, too.

“It’s all about the partnerships,” he said. “We didn’t do any of it by ourselves.”

The UG was able to be a partner with the state in the project, and with business entities such as Cerner, Mayor Holland said.

He said there will be soccer fields built near this site for youth tournament use, and there were futsal courts built throughout the Wyandotte County community.

According to information from Sporting KC, there will be seven full-size soccer fields at the national training center, including five fields when it opens. There will be a natural grass Super Pitch field, including three full-size fields and two synthetic turf fields.

Also, there is a Wyandotte youth soccer complex with 12 fields under development east of the Schlitterbahn water park between Parallel Parkway and State Avenue, according to Sporting KC information. This is slated to open in March 2017.

Dan Flynn of U.S. Soccer said he would like to bring a world championship title to the United States.

“It really is about the vision the ownership of Sporting KC has brought to our partnership and to the sport. It’s not just about the Kansas City community to them, it’s about the greater good of the sport,” he said.

He said the training center is a wonderful opportunity to build the sport. The development of coaches and referees needs to get better, he added. This is a great opportunity, as it builds onto the pathway to bring a men’s soccer World Cup championship to the United States, he said.

The training center will offer sports medicine services and programs for youth and adolescents in all sports, including soccer, said Dr. Randall O’Donnell of Children’s Mercy Hospital.

Facilities will include lap pools and turf area. The Children’s Mercy Sports Medicine and Rehabilitation Center at the national training center will include examination rooms and a radiology area.

It will be another outreach for Children’s Mercy, according to Dr. O’Donnell, which has a facility on State Avenue in Kansas City, Kan., besides its main hospital in Kansas City, Mo.

The professional training facilities will include new Sporting KC player and coach locker rooms, two national team locker rooms, a video analysis suite, a conference room an auditorium and a cafeteria, according to Sporting KC information.